The Critical C's of Microservices - Consistency

"The Critical C's of Microservices" are a series of conversations that development teams should have around building event-driven or other microservice based architectures. These topics will help teams determine which architectural patterns are best for them, and assist in building their systems and processes in a reliable and supportable way.

The "Critical C's" are: Context, Consistency, Contract, Chaos, Competencies and Coalescence. Each of these topics will be covered in detail in this series of articles. Article 1 of the 6 was on the subject of Context. This is article 2 of the series, and covers the topic of Consistency.

The world is eventually consistent. The sooner we get that through our heads and start expecting our systems to act like it, the fewer problems, we will have. In fact, I'll go out on a limb and say that most of the problems in building and maintaining microservice architectures are the result of failing to fully embrace eventual consistency from the start.

Data is consistent when it appears the same way when viewed from multiple perspectives. Our systems are said to be consistent when all of the data them is consistent. A system with strong consistency guarantees would be one where every actor, anywhere in the context of the application, would see the exact same value for any data element at any given time. A system that is eventually consistent is one with strong guarantees that the data will reach all intended targets, but much weaker guarantees about how long it might take to achieve data consistency.

Full consistency is impossible in a world where there is a finite speed of causation. Strong consistency can only be achieved when every portion of the application waits until the data is fully consistent before processing. This is generally quite difficult unless all of the data is housed in a single, ACID compliant data store, which of course, is a very bad idea when building scalable systems. Strong consistency, or anything more stringent than eventual consistency, may be appropriate under very specific circumstances when data stores are being geo-replicated (assuming the database server is designed for such a thing), but can cause real difficulties, especially in the areas of reliability and scalability, when attempted inside an application.

We should challenge demands for higher levels of consistency with rigor. Attempts to provide stronger consistency guarantees than eventual will cause far more problems than they are worth.

We will always need to look for situations where consistency problems might occur (i.e. race-conditions), expect them to happen, and try to design our systems in such a way as to not need to worry about them. Race conditions and other consistency problems are smells. If you are in a situation where you are might see these types of problems, it may indicate that you need to reevaluate the details of your implementation. 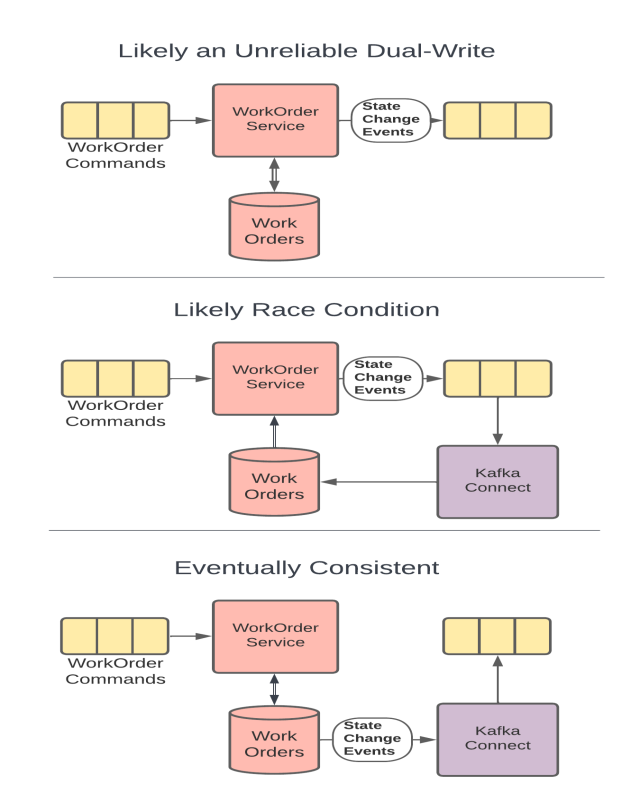 Another example of a consistency smell might be when end-users insist that their UI should not return after they update something in an app, until the data is guaranteed to be consistent. I don't blame users for making these requests. After all, we trained them that the way to be sure that a system is reliable is to hit refresh until they see the data. In this situation, assuming we can't talk the users out of it, our best path is to make the UI wait until our polling, or a notification mechanism, identifies that the data is now consistent. I think this is a pretty rude thing to do to our users, but if they insist on it, I can only advise them against it. I will not destroy the scalability of systems I design, and add complexity to these systems that the developers will need to maintain forever, by simulating consistency deeper inside the app. The internals of the application should be considered eventually consistent at all times and we need to get used to thinking about our systems in this way.

Goals of the Conversation

Development teams should have conversations around Consistency that are primarily focused around making certain that the system is assumed to be eventually consistency throughout. These conversations should include answering questions like:

In the next article of this series we will look at Contract and how we can leverage contracts to make our systems more reliable while still maintaining our agility.