The Critical C's of Microservices - Context

"The Critical C's of Microservices" are a series of conversations that development teams should have around building event-driven or other microservice based architectures. These topics will help teams determine which architectural patterns are best for them, and assist in building their systems and processes in a reliable and supportable way.

The "Critical C's" are: Context, Consistency, Contract, Chaos, Competencies and Coalescence. Each of these topics will be covered in detail in this series of articles, starting with Context.

Update: Part 2 of this series, Consistency is now available.

The execution context is the unit of work of all services. It represents the life-cycle of a single request, regardless of the details of how that request was received. So, whether an HTTP web request, or an asynchronous message from Apache Kafka or Azure Service Bus, the context we care about here is that of a single service processing that one message. Since, for reasons that will be discussed in a future article, there is no way to reliably make more than one change to system state within a single execution context, we must defend this context from the tendency to add additional state changes which would damage the reliability of our services.

There are generally only two situations where it is ok to make more than one change to system state in a single execution context:

Ultimately, to maintain the reliability of our systems, we must be sure we are never trying to make more than one reliable change to system state in a single execution context. This is a very different way of thinking than most developers are used to. In fact, I would say it is the opposite of how many of us have been taught to think about these types of problems. Developers value simplicity, and rightfully so. Unfortunately, problems where we already have a service running that can host logic we need to add, make it seem like the simplest solution is to just "add-on" the new logic to the existing code. The truth of the matter is far different. Let's look at an example: 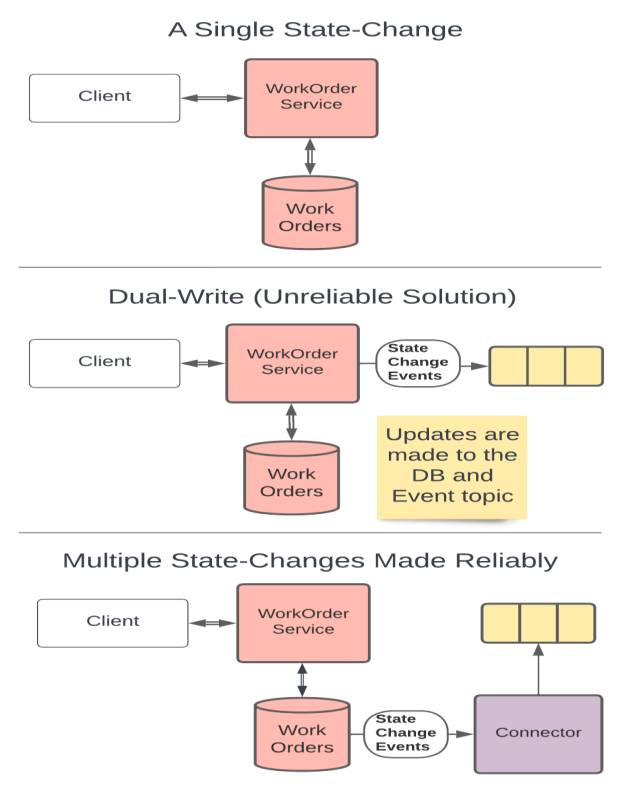 In these drawings we start with a RESTful service that updates a database and returns an appropriate response. This service makes only 1 change to system state so it can be built reliably.

The next two drawings show ways of implementing a new requirement for the system to update a downstream dependency, say a Kafka topic, in addition to the database update. The default for many Technologists would be to just to add-on inside the service. That is, they might suggest that we should have the service update both the database and the topic as shown in the second drawing. This would be an example of the Dual-Writes Anti-Pattern and would hurt both system reliability and supportability.

Instead, the simplest solution that doesn't harm our system's reliability is actually to trigger the downstream action off of the DB update. That is, we can use the Outbox Pattern or if the database supports it, Change Data Capture or a Change Feed to trigger a secondary process that produces the event message. Adding a deployment unit like this might make it feel like a more complicated solution, however it actually reduces the complexity of the initial service, avoids making a change to a working service, and will avoid creating reliability problems by not performing dual-writes.

There are a few things to note here regarding atomic database transactions. An ACID-compliant update to a database represents a single change to system state. If we could make fully ACID-compliant changes across multiple data stores, or other boundaries like web services, the Dual-Writes Anti-Pattern would be much less of a problem. Unfortunately, distributed transactions cannot be used without severely impacting both scalability and performance and are not recommended. It should also be noted that, when talking about only 2 state changes, some threats to reliability may be reduced by being clever with our use of transactions. However, these tricks help us far less than one might think, and have severely diminishing returns when 3 or more state-changes are in-scope. Transactions, while good for keeping local data consistent, are not good for maintaining system reliability and are horrible for system scalability.

Goals of the Conversation

Development teams should have conversations around Context that are primarily focused around the tools and techniques that they intend to use to avoid the Dual-Writes Anti-Pattern. These conversations should include answering questions like:

In the next article of this series we will look at Consistency, and see how Eventual Consistency represents the reality of the world we live in.