The slide deck for my presentation on Optimization for Developers (A Developer’s Guide to Finding Optimal Solutions) can be found here.  I hope that if you attended one of my code camp sessions on the topic, you enjoyed it and found it valuable.  I am happy to accept any feedback via Twitter @bsstahl.

Dynamic Programming (DP) is a mathematical tool that can be used to efficiently solve certain types of problems and is a must-have in any software developer's toolbox. A lot has been written about this process from a mathematician's perspective but there are very few resources out there to help software developers who want to implement this technique in code. In this article and the companion conference talk "Dynamic Optimization - One Algorithm All Programmers Should Know", I attempt to demystify this simple tool so that developer's can implement it for their customers.

What is Combinatorial Optimization?

Mathematical or Combinatorial Optimization is the process of finding the best available solution to a problem by minimizing or eliminating undesirable factors and maximizing desirable ones.  For example, we might want to find the best path through a graph that represents the roads and intersections of our city.  In this case, we might want to minimize the distance travelled, or the estimated amount of time it will take to travel that distance.  Other examples of optimization problems include determining the best utilization of a machine or device, optimal assignment of scarce resources, and a spell-checker determining the most likely word being misspelled.

What is Dynamic Programming?

Ultimately, DP is just a process, a methodology for solving optimization problems that can be defined recursively 1.  It is really about a way of attacking a problem that, if it were addressed naïvely, might not produce the best possible answer, or might not even converge to a solution in an acceptable amount of time.  Dynamic Programming provides a logical approach to these types of problems through a 2-step process that has the effect of breaking the problem into smaller sub-problems and solving each sub-problem only once, caching the results for later use 2.

The steps in the process are as follows:

Since we fill-out the entire cache for each problem 3, we can be 100% certain that we know what the best possible answers to the questions are because we have explored all possibilities.

Let's look at one of the canonical types of problems that can be solved using Dynamic Programming, the knapsack problem.  A knapsack problem occurs in any situation where you have a limited capacity that can be consumed by a number of different possible options.  We need to look for the best fit and optimize for the maximum based on the definition of value in our problem.  This class of problem gets its name from the story of the archeologist in the collapsing ruin.  She has a knapsack that can hold a known weight without tearing and she needs to use it to rescue artifacts from the ruin before it collapses entirely.   She wants to maximize the value of artifacts she can save, without exceeding the capacity of her knapsack, because it would then tear and she wouldn't be able to carry anything.

We can solve this type of problem using Dynamic Programming by filling-out a table that holds possible capacities, from 0 to the capacity of our known knapsack, and each of the possible items to use to fill that space, as shown below. 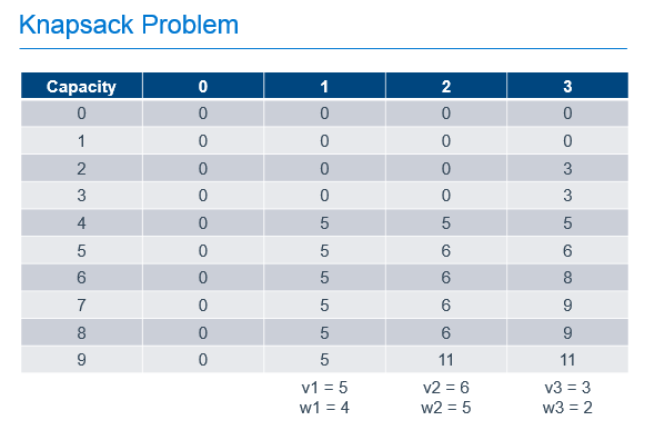 In this example, there are 3 items with weights of 4, 5 and 2.  These items have values of 5, 6 and 3 respectively and can be placed in a knapsack with capacity of 9. The leftmost column of the table represents the capacities of knapsacks from 0, up to and including the capacity of our knapsack.  The next column represents the best value we would get in the knapsack if we had the option of putting 0 items in our knapsack. The next, the best value if we had the option of taking the 1st item, the next column, the option to take the 2nd item on top of any previous items, and so forth until we complete the table.  As you can see, the most value we can get in our knapsack with the option of picking from these 3 items is 11, as found in the last row of the last column. That is, the cell that represents a knapsack with our known capacity, with the option to chose from all of the items.

To calculate each of these cells, we build on the values calculated earlier in the process.  For the 1st column, it is easy. If we can chose no items, the value of the items in our knapsack is always 0. The rest of the cells are calculated by determining the greater of the following 2 values:

So, for the cell in the column labeled "1" with a knapsack capacity of 6, we take the greater of:

For the cell in column "2" with a knapsack capacity of 9, we take the greater of:

Each cell in the table can be filled out by doing these simple calculations, 1 addition and 1 comparison, using the values previously calculated as shown in the annotated table below. 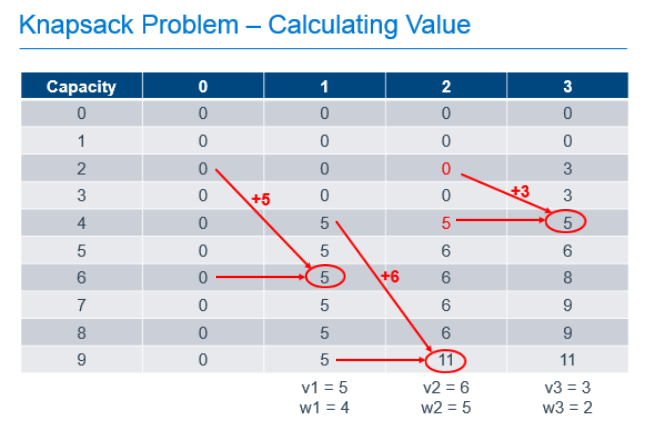 So we've filled out the table and know, from the cell in the bottom right that the maximum value we can get from this knapsack with these items is 11. Great, but that only answers the question of maximum value, it doesn't tell us which items are chosen to achieve this value.  To determine that, we need to work backward from the known best value.

Starting at the known best value in the bottom-right cell, we can look one cell to the left to see that the value there is the same.  Since we know that taking an item would increase the value of the knapsack, we can know that we must not have chosen to take the item in the last column.  We can then repeat the process from there.  From the bottom cell in the column labeled "2", we can look left and see that the value in the previous column did change, so we know we need to take the item in column "2" to get our maximum value.  Since we know that item 2 had a weight of 5, we can subtract that from the capacity of our knapsack, and continue the process from that point, knowing that we now only have 4 more units of capacity to work with.  Comparing the item in the column labeled "1" and a knapsack capacity of 4 with the value of the equivalent knapsack in column "0", we can see that we need to include item 1 in our knapsack to get the optimum result.

What did we actually do here?

There is no magic here. All we did was take a problem that we could describe in a recursive way, and implement a process that used easy calculations that built upon the results of previous calculations, to fill-out a data cache that allowed us to answer the two primary questions of this problem:

I am happy to answer questions or discuss this further. Ping me on Twitter @bsstahl with your comments or questions. I'd love to hear from you.  I am also available to deliver a talk to your conference or user group on this or other topics. You can contact me here.

I hope you’ve had an opportunity to see my presentation, “Dynamic Optimization – One Technique all Programmers Should Know” at a Code Camp or User Group near you.  If so, and you want to have a copy of the slide deck for your very own, you can see it embedded below, or use the direct link to the Powerpoint here.

We look at three examples during the presentation, the first is done only “on paper” and is an example of using this technique to solve a knapsack problem. The second example is done in pseudo-code and solves a linear best-path problem in the game of Chutes & Ladders.  Finally, we drop into Visual Studio to solve a 2-dimensional best-path problem.  Sample code for both of the last 2 examples can be found in GitHub.

Keep an eye on my Speaking Engagements Page for opportunities to see this presentation live. If you are a user group or conference organizer, you can contact me to schedule an in-person presentation. This presentation is a lot of fun to deliver and has been received extremely well at Code Camps and User Groups across the country. 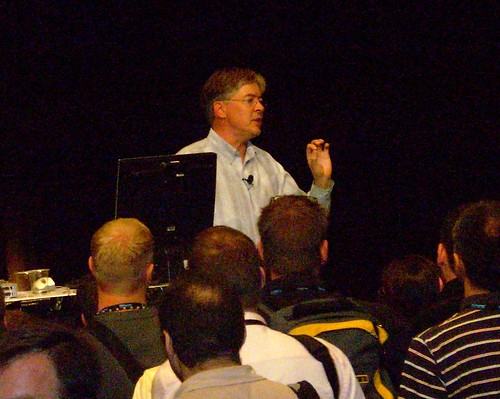