Is a Type an Implementation of an Interface?

One of the techniques I recommend highly in my Simplify Your API talk is the use of extension methods to hide the complexity of lower-level API functionality.  A good example of a place to use this methodology came-up last night in a great Reflection talk by Jeremy Clark (Twitter, Blog) at the NorthWest Valley .NET User Group. 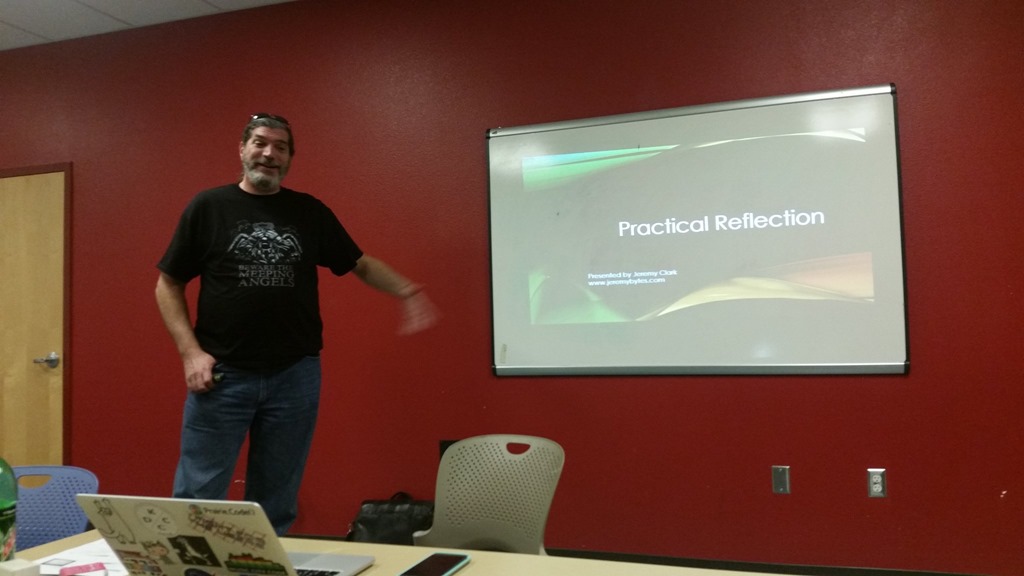 Jeremy was demonstrating a method that would spin-through an assembly and load all classes within that assembly that implemented a particular interface.  The syntax to do the checks on each type were just a bit more obtuse than Jeremy would have liked them to be.  As we left that talk, I only half-jokingly told Jeremy that I was going to write him an extension method to make that activity simpler.  Being a man of my word, I present the code below to do just that.

I know, I know. I was they guy always preaching that every entity that was being collected had to have its own collection object. It was the right thing at the time; if you needed to take an action on an enumeration or list of objects, those actions needed to be done within a strongly-typed collection object to maintain encapsulation. Even if all that was happening was that an inherited List<T> function was being called, that functionality needed to be called on the TCollection object because, if it wasn't, it was likely that the next time logic needed to be performed on the collection, there wouldn't be a place to put it. Collection logic would end up being spread-out around your code rather than encapsulated in the collection. It was also possible that the implementation might change and need to be updated everywhere, instead of in one place.

Today however, that has all changed. Extension methods now allow us, at any time, to add functionality to ICollection<T>, IList<T>, IEnumerable<T> or any other interface or class. We can attach our list or enumeration based actions directly to the list or enumeration class, and do so at any time, since the methods appear the same to the developer as methods directly on the collection type. Thus, the "no place to put it" fear no longer exists. I've even started using this technique for my factory methods to make it clear that what I am creating is, in fact, an IEnumerable<T>, as in this example.

In this example, both the Create and GetNearby methods are extension methods found in a static class called StationExtensions.

So, the big advantage here is that these methods can be added anytime, meaning we don't need to create an object that we MAY need in the future. This is better adherence to the YAGNI principle so it is a better pattern to follow. But what about disadvantages? Does it hurt us in any way to perform our collection actions this way? I'm not comfortable answering that question with an absolute "no" yet because I don't think I've been using this technique long enough to have covered enough ground with it, but I can certainly say that I haven't found any disadvantages yet. It seems like these extension methods are basically perfect for this type of activity. These methods do everything that the methods of a collection object do, can (and should) be put in a separate module to keep the code together, can be navigated to by Visual Studio in the same way as other methods, and have the same access (private, internal, public) restrictions that collection objects have. About the only thing I can say that is not 100% positive about using these techniques is that the (null as IEnumerable<T>) syntax to create a local variable instance to call the class factory from is not quite as elegant as I'd like it to be.

So you tell me, do you still create collection objects? Have you found any reason why using extension methods in this way is not as good as putting those methods into a strongly-typed collection? Sound off in the Fediverse @bsstahl@fosstodon.org and let's talk about it.

“One Reason to Change” Means the Code

There was some confusion last week at the SoCalCodeCamp about what the phrase “One Reason to Change” actually means.  As you probably know, the Single Responsibility Principle states that every class should have one and only one responsibility within the system. A common check for adherence to this principal is that the object has only one reason to change. However, it is important to realize that this is referring to the code (the class), not the state of the object (the instance).  The state of the object may have many reasons to change, however, we as developers should have only 1 reason to change the code for our objects.  For example, if the object is in the business-rules layer, we should only have to change the code if the business rules change.  Likewise, if the object is in the data tier, it should only need code changes if the structure of the data changes.

Anyone who uses code generation more than trivially in their .NET solutions knows how difficult it is to add metadata to a member of a generated class, even if that class is marked as partial.  Partial classes are terrific for adding members to generated classes, and even allow you to change metadata and other information about the class itself, such as by adding an interface that it implements.  You cannot however, modify an existing member of the class by marking it to not be serialized, or to make it a part of a WCF data contract. I believe, as more and more code is generated by .NET developers using Entity Framework, wsdl.exe and other proxy generation tools, or even T4 directly; we will see a greatly increased need for a workable solution to this problem.

The most common work-around for this problem today is the use of “buddy classes” where a separate class is created to hold the metadata.  A good example of this type of solution can be found in ASP.NET Dynamic Data.  However, as you might imagine, this type of implementation has some fairly severe drawbacks.  For one, it requires some sort of mechanism for unifying the functionality of the two classes. An example of this is the case where we have a property on an Entity Framework POCO that should not be serialized when we serialize the rest of the class.  We cannot serialize the POCO correctly unless we use a custom serializer that is aware of the metadata in the buddy class.  We have similar problems if we are trying to use a generated base class as the output of a WCF service.  If the [DataContract] attribute is not already on the generated code (which requires a reference to the System.Runtime.Serialization library) we will have to create a separate object that implements the DataContract to be exposed by the service.  In most cases, this object will be an almost exact duplicate of the state features of the original object, forcing the replication of some code, even if that code is just the properties of the object.

There is a feature that has been proposed in the C# language for some time now that would allow this type of behavior within a single class.  This feature would use the keyword existing to allow the duplication of the definition of partial class members into non-code-generated files so that those members can be decorated with additional metadata without risk of being overwritten when the automatic code is regenerated, and without duplicating the functionality in the member.  Unfortunately, it appears that this feature is not going to make it into the next version of C# and is at risk of not being in the following version as well.  In an email exchange, Mads Torgersen, C# Program Manager at Microsoft, stated that

…maybe we’re looking at C# next-next-next before the next big set of new feature ads makes it in [to the language].

One of the reasons (although certainly not the only reason) for this delay, as explained by Mads, is what really struck me:

To be honest the clamoring for the “existing” feature has died down quite a bit. I think that people are probably resigning to the use of “buddy classes” for this purpose; this seems to be the most common substitute.

…ultimately your feedback is at the basis of how we make these choices.

So I began to wonder, have we really resigned ourselves to using these buddy classes?  Are they less of a problem for others then they are for me?  Am I, perhaps, missing a fairly easy solution to this problem that involves the use of “buddy classes” but solves the issues with that methodology?  Or perhaps, are there other features that we want in the language that are just more important to us than this one?

Please let me know if am I missing something or if there are others out there who feel as I do on this feature request.  If there are many others like me, perhaps we can put our voices together to, as Mads suggests,  let Microsoft know what we need.

Another feature that concerns me (see my earlier post) is .NET Generics. While it is nice to be able to specify a strongly-typed collection without having to create a class, it seems to me like this is still the house of sticks, rather than the house of bricks we really want. Also, extensibility seems to suffer in this model because we are limiting our encapsulation. I certainly have not used this enough to say one way or another for certain, I just currently have concerns.