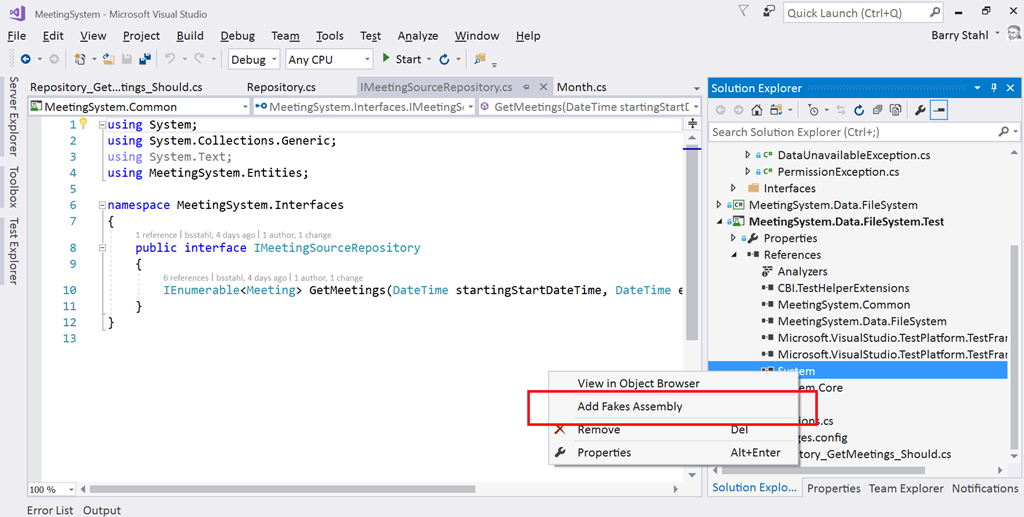 What can you test with these Shim objects that you were unable to test before?  Tell me about it @bsstahl@fosstodon.org.

The demo code for my presentation on Testing in Visual Studio 2017 at the VS2017 Launch event can be found on GitHub.  There are 2 branches to this repository, the Main branch which holds the completed demo, and the DemoStart branch which holds the starting point of the demonstration in case you would like to implement the sample yourself.

The demo shows how Microsoft Fakes (formerly Moles) can be used to create tests against code that does not implement a reusable interface. This can be done  without having to resort to integration style tests or writing extra wrapper code just to implement an interface.  During my launch presentation, I also use this code to demonstrate the use of Intellitest (formerly Pex) to generate exploratory tests.

Since I’m a fan of puzzles, I’ve been spending a bit of time on PexForFun.com lately.  This site was put together by the Pex team (part of Microsoft Research) to show off the capabilities of some of the research group’s  latest creations; Pex, Moles, and Code Contracts.  I’ve been enjoying this site because it gives me the opportunity to solve some coding puzzles, while at the same time discovering things about these new tools.  Today alone, I discovered the following:

The order of Contract.Requires() in Code Contracts matters.

Though it doesn’t seem like it should matter (at least to me), the order that code contracts are specified does seem to matter at execution, at least in some circumstances, if runtime checking is enabled.  For example, in my ChallengeAuction code duel there is a practical limit to how many bids may be supplied since Pex has to test each of the data elements.  Defining this limit in as a Contract.Requires() element works well as long as that statement is placed before a statement testing the data elements, such as one verifying that the key for each bid is not an empty string.  Reversing the order of these contract statements causes the test to occur for each data element of the dictionary, and a “path bounds exceeded” error to be generated by Pex.

The same code duel, ChallengeAuction pointed out to me that apparently, Pex only generates 1 data element in a dictionary.  That is, in the Dictionary<TKey, TValue> defined for bids in the code duel, Pex generates a Dictionary object of various sizes, but only supplies 1 data element within the Dictionary.  This means that a number of code paths are not being verified since it is important in this duel to test whether or not the highest bid wins the auction.  If you try the duel, you could actually fool Pex into thinking you have a successful solution even with a method that returns the lowest or first bids as the winning bid.

I have posted this as a question on the Pex and Moles PowerTool forum and have yet to receive a response.

I highly recommend checking out PexForFun.com. Try a few code duels and perhaps create a few of your own.  I have created several code duels which you are welcome to try and solve: