Two Features you Need in Your Service SLAs

To allow ourselves to create the best possible services for our clients, it is important to make those services as flexible and maintainable as possible.  Building services in an agile way helps us to create better services, however it makes it more likely that our service interface will, at some point, have to change.  Changing a service interface after publication is, and should be, a well gated, well thought-out process. By changing the interface, you are changing the contract your service has with all of your clients, and you are probably requiring every one of the service consumers to change.  This should not be done lightly. However, there are a few things that can be done to minimize the impacts of these changes. Several of these things require agreements with the clients up front.  As a result, these items should be included in the Service Level Agreement (SLA) between the service providers and the consumers.

Caveat: I am a solution architect, not an expert in creating service level agreements.  Typically, my only involvement with SLAs is to object when I can’t get what I need in one from a service provider. My intent here is to call-out a few things that all service providers should include in their SLAs to maintain the flexibility of their APIs. There are many other things that should be included in any good SLA that I will not be discussing here.

The two items that I believe should be included in all service SLAs are the requirements that the clients support both Lax Versioning and Forward Compatible Contracts.  Each of these items is discussed in some detail below.

Lax Versioning allows us to add new, optional members to the data contract of the service without that change being considered a breaking change. Some modern service frameworks provide this behavior by default and many of the changes we might make to a service fall into this category.  By reducing the number of changes that are considered breaking, we can lessen the burden on our implementation teams, reducing coordination requirements with service consumers, and shortening time to market of these changes.

One of the major impacts that Lax Versioning has is that it requires us to either avoid schema validation altogether, or to use specially designed, versionable schemas to do our validation.  I recommend avoiding schema validation wherever reasonable and possible.

For example, suppose we were version a contract such that we added an additional address type to an employee entity  (V1 only has home address, V2 has home and work addresses).  If we change the service to return the V2 employee prior to changing the client, the client will accept the additional (optional) address type because we have already required Lax Versioning, but it will not know what to do with the information.  If a V1 client without round-tripping support sends that employee back to the server, the additional address type will not be included.  If however, the V1 client supports this round-tripping behavior, it will still be unable to use the data in the additional address field, but will return it to the server if the entity is sent back in a subsequent call.  These behaviors with a V1 client and a V2 service are shown in the diagram below. 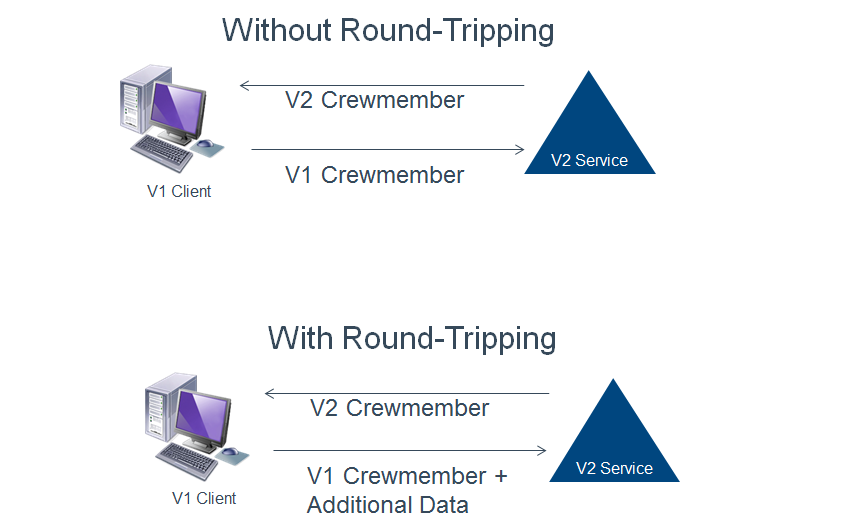 If the same practice is used on the server side, then we can decouple the client and server from many implementation changes.  Clients would be free to implement the new versions of contracts as soon as they are ready, without having to wait for the service to roll-out.  Likewise, many changes at the service side could be made knowing that data sent down to the clients will not be lost when it is returned to the server.

Making changes to the contract of existing services is a process that has risk, and requires quite a bit of coordination with clients. Some of the risks and difficulties involved in the process can be mitigated by including just 2 requirements in the Service Level Agreements of our services.  By requiring clients to implement Lax Versioning and making our contracts Forward Compatible, we can reduce the impact of some changes, and decouple others such that we significantly reduce the risk involved in making these changes, and improve our time-to-market for these deployments.

Anyone who uses code generation more than trivially in their .NET solutions knows how difficult it is to add metadata to a member of a generated class, even if that class is marked as partial.  Partial classes are terrific for adding members to generated classes, and even allow you to change metadata and other information about the class itself, such as by adding an interface that it implements.  You cannot however, modify an existing member of the class by marking it to not be serialized, or to make it a part of a WCF data contract. I believe, as more and more code is generated by .NET developers using Entity Framework, wsdl.exe and other proxy generation tools, or even T4 directly; we will see a greatly increased need for a workable solution to this problem.

The most common work-around for this problem today is the use of “buddy classes” where a separate class is created to hold the metadata.  A good example of this type of solution can be found in ASP.NET Dynamic Data.  However, as you might imagine, this type of implementation has some fairly severe drawbacks.  For one, it requires some sort of mechanism for unifying the functionality of the two classes. An example of this is the case where we have a property on an Entity Framework POCO that should not be serialized when we serialize the rest of the class.  We cannot serialize the POCO correctly unless we use a custom serializer that is aware of the metadata in the buddy class.  We have similar problems if we are trying to use a generated base class as the output of a WCF service.  If the [DataContract] attribute is not already on the generated code (which requires a reference to the System.Runtime.Serialization library) we will have to create a separate object that implements the DataContract to be exposed by the service.  In most cases, this object will be an almost exact duplicate of the state features of the original object, forcing the replication of some code, even if that code is just the properties of the object.

There is a feature that has been proposed in the C# language for some time now that would allow this type of behavior within a single class.  This feature would use the keyword existing to allow the duplication of the definition of partial class members into non-code-generated files so that those members can be decorated with additional metadata without risk of being overwritten when the automatic code is regenerated, and without duplicating the functionality in the member.  Unfortunately, it appears that this feature is not going to make it into the next version of C# and is at risk of not being in the following version as well.  In an email exchange, Mads Torgersen, C# Program Manager at Microsoft, stated that

…maybe we’re looking at C# next-next-next before the next big set of new feature ads makes it in [to the language].

One of the reasons (although certainly not the only reason) for this delay, as explained by Mads, is what really struck me:

To be honest the clamoring for the “existing” feature has died down quite a bit. I think that people are probably resigning to the use of “buddy classes” for this purpose; this seems to be the most common substitute.

…ultimately your feedback is at the basis of how we make these choices.

So I began to wonder, have we really resigned ourselves to using these buddy classes?  Are they less of a problem for others then they are for me?  Am I, perhaps, missing a fairly easy solution to this problem that involves the use of “buddy classes” but solves the issues with that methodology?  Or perhaps, are there other features that we want in the language that are just more important to us than this one?

Please let me know if am I missing something or if there are others out there who feel as I do on this feature request.  If there are many others like me, perhaps we can put our voices together to, as Mads suggests,  let Microsoft know what we need.